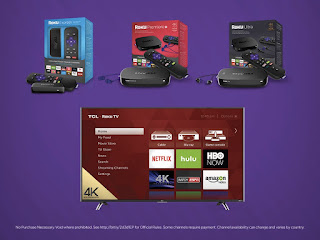 New Roku devices have been announced. They won't actually be available until October, so we haven't had the opportunity to use them.

It looks like a good lineup refresh. The lineup that's being replaced has been around since 2013. Yes, there have been minor refreshes to the lineup since then, but they were mostly 2013-era boxes. This changes.

I've noticed some things I like and some things I don't like. However, until I get my hands on them, it'll be hard to determine if my initial impression is correct. We'll wait and see.

In the meantime, we'll patiently wait for the devices to begin appearing on the shelves.
Posted by DBDukes at 6:30 AM No comments: Links to this post

There has been no official word that we've seen from Apple, but the third-generation Apple TV has been removed from Apple's Website. The device can still be found in retail stores such as Best Buy, Walmart, Target, and others.

The third generation device was originally released in early 2012, and received a hardware refresh the next year.

When the new Apple TV (4th generation) device was released in late 2015, Apple didn't discontinued the older device, but dropped the price of the 3rd generation Apple TV from $99 to $69.

Posted by DBDukes at 2:48 PM No comments:

The Sony streaming service PlayStation Vue has expanded to include Roku among its supported platforms. The most-used streamer was absent from Sony's launch of PlayStation Vue. Previously, the only top streaming devices that supported PlayStation Vue were Amazon's Fire TV (and Fire TV Stick) and Google's Chromecast. Sony's PlayStation Blog made the announcement:

We are happy to share that PlayStation Vue is expanding to Roku devices today, with support for Android smartphones and tablets launching next week. Since we’ve launched PlayStation Vue nationwide, we have heard from many of you that Roku and Android are the top devices you wanted us to add, so we’re pleased to make this a reality.

For more about PlayStation Vue and how it compares to other streaming services, check out our Streaming Services page.
Posted by DBDukes at 11:00 AM No comments: Links to this post

On May 24, 2016, The Verge reported that Google has confirmed the discontinuation of the Nexus Player.


The hockey puck-shaped device, manufactured by Asus, has been unavailable from major third-party retailers like Best Buy for months. And after a brief Google Store restock in early April (probably to get rid of the last units), Google has now pulled the Nexus Player's store listing entirely.


(E)lectronics manufacturers like Vizio have chosen Google Cast (the underlying platform that makes Chromecast work) instead of Android TV. It's a decision that gives their products a more simplistic interface while retaining the ability to stream content from popular apps. Android TV is a much fuller offering — not unlike a Roku — with built-in apps, voice search, and even access to the Google Play Store for more software options.

We have updated the Website to remove information about the Nexus Player.

A lot of people used the Nexus Player, but so many more use the Chromecast. The different technologies involved between the two devices hurt, I'm sure. In the long run, this may be the best decision for Google. Of course, Google thinks so, or the company wouldn't have made the decision.

If you have a Nexus Player, continue to enjoy it. There's no reason to make a change. If you were thinking about getting one, we're suggesting that you don't. You may find some discontinued at a good price, but investing in current devices is often a better decision.
Posted by DBDukes at 2:15 PM No comments:

Are You Ready For This?

You're here because you either missed that left turn at Albuquerque, or you're interest in cutting the cord. You have come to the ...